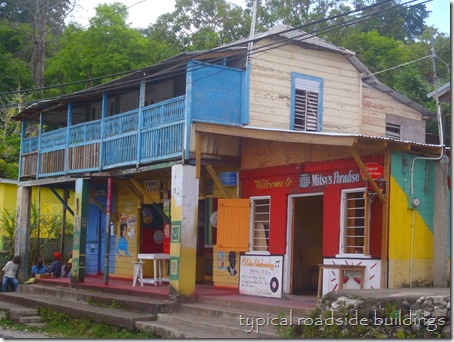 Thankfully the very nasty weather that had been forecast got stalled below Jamaica and we had very light winds and just sprinkles of rain during our stay.  This did mean however that we had to wait and wait for the weather further south to clear away before we could finally start our passage to Panama.

It was no hardship whiling away days in Port Antonio, it is a small non touristy town with a vibrant market area, several Jamaican famous “jerk chicken” stalls, some passable supermarkets, several churches and way too many banks.  We filled the fridge with much needed fresh vegetables, last time was in the US Virgins a month ago so we had been using up tinned provisions earmarked for the Pacific, never mind – we got to eat! 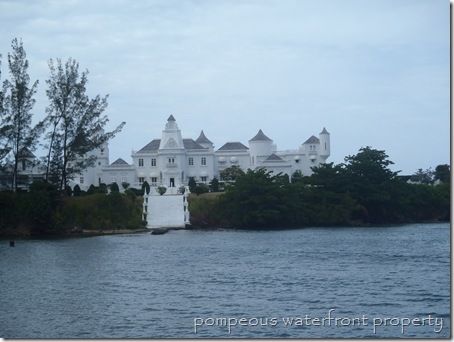 We took our bikes ashore and went for a long ride making the most of the cooler cloudy weather/  We headed east along the coast, past a huge mansion build only 40 years ago but replicating a European castle, talk about look out of place ~ just what were they thinking?

On we cycled through small hamlets housing very humble abodes, past a gated community of upmarket expat or holiday houses set in large tropical grounds such a contrast to the neighbouring local homes,  but providing much needed employment for gardeners, housekeepers etc. 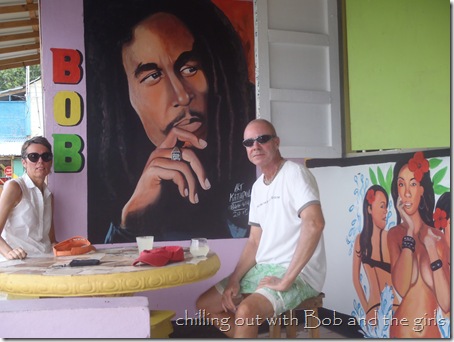 Peddling on, next up was THE Blue Lagoon, yes the very one that a young Brooke Shields launched her movie career in a skimpy bikini many years ago.  With grey skies reflecting into the lagoon there was not even a smidgen of blue to be seen, well, it just didn't look much like the lagoon I remembered from the movie.

A couple of k’s further on and we arrived at Frenchman’s Cove rumoured to be “the best beach in Jamaica” ~   We can not confirm this as an entrance fee of USD10 each was required, and quite frankly we see plenty of beaches for free so skipped this one and instead spent our money having a cold drink with Bob Marley and the bikini clad girls in a shacky little roadside bar. 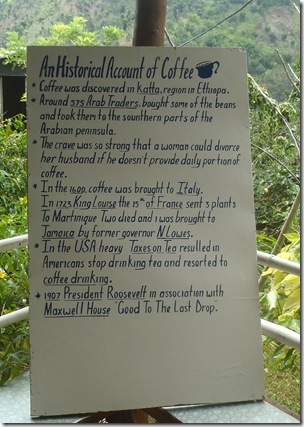 Into the Blue Mountains

Another day we shared a hire car with our neighbours Rachael and Steve off El Giro.  We took the coast road west this time, over the Rio Grande then turned up into the hills and slowly wound our way up into the cloud shrouded Blue Mountains and John Crow National Park, famous worldwide for its excellent coffee, and our mission was to drink some!

On and on we went, slowly dodging potholes big enough to live in, deeper and deeper into the jungle, higher and higher into the mountains ~ and then there was a sign!  We made a sharp right turn up an even steeper and narrower road, distance not hinted at (didn’t want to put us off now did they), possibility of a u-turn very slim, the things we do for a coffee!!

Our perseverance paid off although we nearly missed the tiny roadside sign a couple of k’s further on, not sure how many customers they see but I suspect just a hardy few pop up each month. 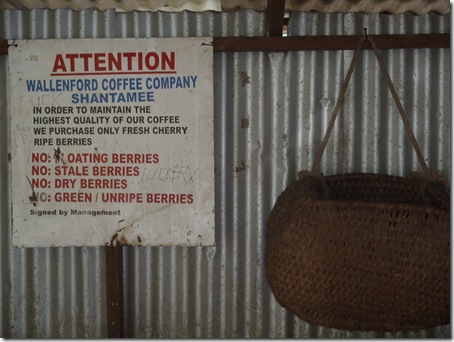 We did the obligatory walk around the gardens, saw all the herbs, spices and fruit growing and of course the coffee.  The vegetation was very lush and green following recent rains but the ground still dry and they were eagerly awaiting the wet season to cool things down and liven the plants up.

We drank freshly brewed Blue Mountains Coffee out of calabash cups (type of fruit that grows on trees that the shells are used for to make bowls, cutlery etc) and enjoyed the mountain air, jungle noises and spectacular scenery. 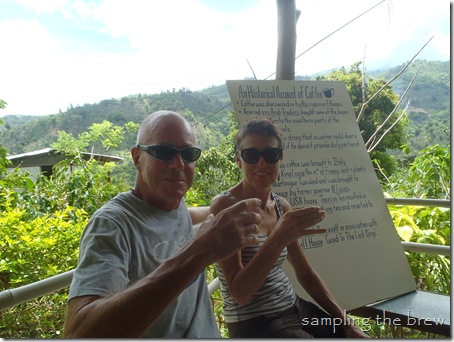 But Where To Now?

After coffee we were faced with a dilemma,  we had planned to continue into the mountains high up to Irish Town for lunch then drop down the other side, skirting Kingston and hooking into the coast road back to Port Antonio, thereby doing a loop of North Eastern Jamaica.  I

t had all looked feasible on the map but as you all know our original plans often don’t come to fruition and when we were told the road deteriorated even more as we got higher and it would be 3 – 4 hours just to get to Irish Town, and we couldn’t skirt Kingston we would have to drive right through it.  So we decided it would be sensible to turn around and head back down to sea level. 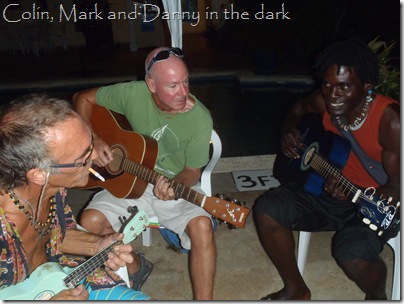 Back on the coast road we went to Boston Bay renowned for its extra spicy jerk chicken and pork, cooked over hot coals on roadside bar-b-que pits.  We found a spot with a shady terrace and good view and relaxed into a very long late lazy lunch not such a bad alternative!

Jammin’ Away into the Dark

A weather window was immerging, it wasn’t going to be perfect as it looked like we would have to motor at the end (better than being beaten up!) but it was the best we could hope for and there was a tropical wave developing that we wanted to avoid. 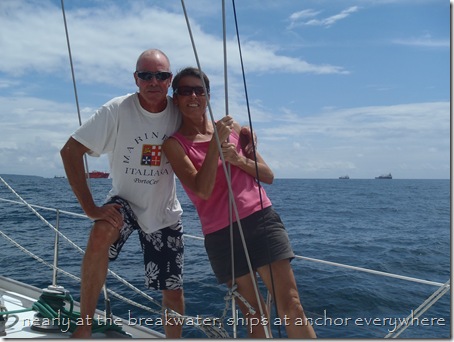 So with most of the boats readying themselves for an impending departure we decided to have a Jammin’ Happy Hour in the Marina Bar, all musicians, singers and onlookers welcome.   We had a good turn out and fun evening,  joined by local Danny who was extremely hard to see in the dark as you can tell from the photo!

Heading South Till the Sea Runs Out

We motored out of Port Antonio at 6.15am on the 26th May, surf was breaking on each side of channel, there was a big swell, very confused seas and no wind, yuk!  The first 5 hours really were pretty horrible until we cleared the eastern coast of Jamaica then we picked up a light breeze, raised sails, turned off the engine and finally pointed south west. 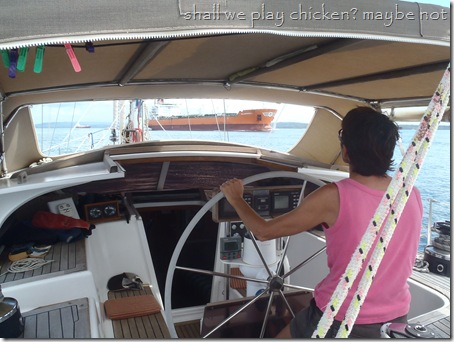 Eventually the sea state settled and we had a comfortable sail with winds around 15 knots or less just aft of the beam, Balvenies (and Admirals) favourite point of sail.  We made a couple of sail changes enroute and eventually were pointing dead down wind so deployed both our poles and floated off downwind towards the Panama Canal.

As we closed on the Central American coast the winds became fickle, the engine came on and off as the squalls came and went and the shipping steadily increased.  We wove our way through the myriad of ships at anchor awaiting their turn to transit the canal, called Port Control for permission to enter through the harbour breakwater, then thought it prudent to go behind a huge container ship that was bearing down on us at speed. 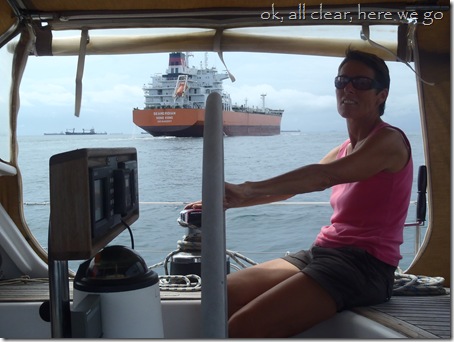 We called Shelter Bay Marina and were allocated a berth, finally returning after our first arrival here 3 years ago and that should be the end of this chapter but we decided to arrive in spectacular style.  The berth we were allocated had just a little too much of a sharp turn for us (envy those yachts with bow thrusters big time!), so skipper reversed to widen the angle a little but there was an underwater mooring line lurking where it shouldn’t have been and our propeller found it, it then got wrapped extremely tightly around the shaft and stalled the engine.  Then to keep out of harms way until the marina dinghy arrived to tow us, Balvenie slowly floated into the shallows and ran herself aground into the mud!!  Way too much entertainment after 4 nights at sea but at least we never hit any thing.