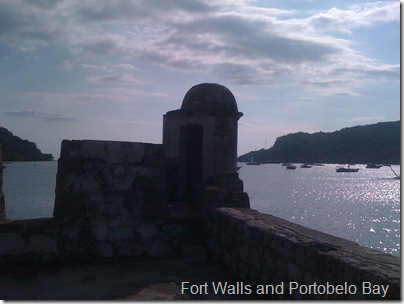 Finally departing Portobelo
After a month sitting at anchor in Portobelo it was finally time to make our final move of the season.  With a weather forecast for the week of 10 to 15 knots from the northeast we were expecting a good run the 20 odd miles southwest down to Colon.   Sunday and Monday the winds were steady, we checked out (something you need to do on a port by port basis in Panama) on Monday and were ready to depart Tuesday morning.  We awoke to a very gloomy day and waited while an early morning squall with torrential rain passed, it was little surprise that it brought with it a westerly breeze – always on the nose! 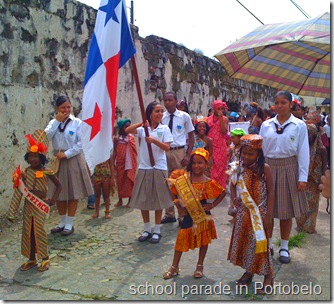 We departed anyway, thinking the weather cell would soon pass and the settled nor’easter would return.  But no, not today, we motored into around 15 knots of wind, a very choppy sea, a cross swell, at times a 2 knot current against us and under very gloomy skies – not really what we had in mind as our last run of the season!

There were many ships lying at anchor just offshore as we closed on Colon, all waiting for their turn to transit the Panama Canal, leaving the Caribbean Sea and popping out into the Pacific Ocean.  We radioed Port Control on our final approach to gain permission to access this busy harbour area and then squeezed in through the breakwater entrance passing a very large container ship as it entered the Caribbean.  The ships were lined up about 7 minutes apart so it was a little challenging gauging their speed and picking the moment to zoom through the gap before the next one powered down on us.   Never too challenging for Skipper though, he timed it perfectly and we motor sailed through without incident and headed across the bay to Shelter Bay Marina.

Marina life again
So we have tied Balvenie up and booked into Shelter Bay for 3 months, its a great marina set in a National Park Rainforest. It is very isolated but that’s part of its attraction and they do run a morning shuttle bus into an adequate shopping centre and Colon.  But we are not staying, my Dad is not well so we have decided to take the opportunity to fly back to New Zealand for a couple of months and spend time with family and friends.  We will move from a Panamanian tropical rainy season to a New Zealand winter rainy season, and although much much colder we are expecting (hoping) to see a lot more sun down under.

We have spent a frantic 10 days closing Balvenie up for “winter”.  With so much rain and high humidity mould is a huge issue here.  We have removed the sails, waterproofed the canvas work, washed dried and vacuum packed all the clothes and linen, cleaned the boat from top to bottom in an effort to avoid mould growing inside.  Plus we have rented a big dehumidifier and engaged the services of the onsite company that checks the yachts regularly.   In addition, Mark has disconnected all the wiring for the instruments, electronics and radios to try to contain any damage that may occur in the event of a lightening strike.  There is nothing else we can do, so we are heading for the airport.

Whatever happens now is out of our hands!
No comments:

Email ThisBlogThis!Share to TwitterShare to FacebookShare to Pinterest
Labels: Panama 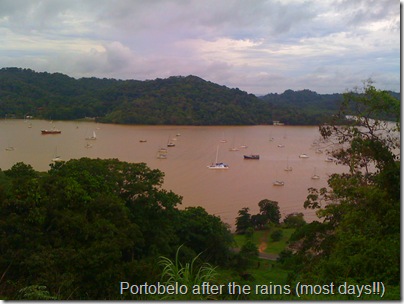 Portobelo – the not so beautiful port
So we moved on from the comfortable, flat, sheltered, scenic anchorage of Linton in search of an ATM machine.  The small town of Portobelo came well recommended offering everything we needed - cash machine, bakery, a couple of cruisers bars, some Chinese grocery stores, historical ruins – what more could we want?

Our first priority was getting some money but this turned out to be just a tad harder than it should be.  When we first arrived the one and only ATM machine (stand alone – no bank) was accepting cards, printing a receipt, giving cards back but not dispensing money but then it was debiting your account! 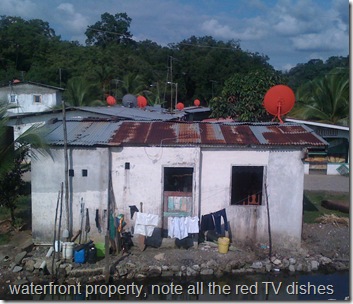 Luckily we heard this on the morning “Cruisers Net” before we too fell victim and inserted our card.  So in order to get some much needed funds we spent $3 of our remaining $9 and travelled to the closet working ATM an hour away on the bus, thankfully it did have money!

Alas the ATM saga doesn’t end there, we needed more money late last week, the machine had been working again but then ran out of money last Thursday.  We understand it was still empty on Friday night when 2 men were arrested trying to steal it and put it on the back of a truck – said machine is now completely out of order and we had another bus trip to get more money! 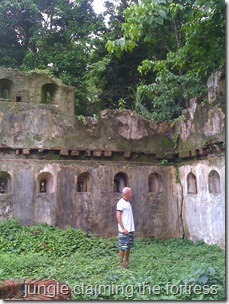 The history and ruins
There are some interesting ruins around the harbour remaining from the days when riches were shipped by the Spanish from here.  Christopher Columbus first discovered the bay in 1502 and recognised its importance as a safe harbour that was easy to access.  Many years later when the Spanish stripped South and Central America of its gold and silver the area became one the most important sites for storing then shipping all the bootie back to Seville in Southern Spain.  Fortifications were built then strengthened to keep pirates out – in particular Sir Francis Drake who made several successful attempts to steal the gold from the Spanish who of course had already stolen it from the indigenous people. 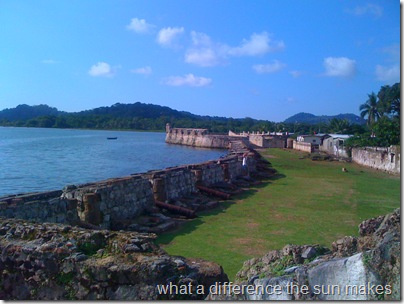 The forts are easy to access and once upon a time had excellent informative plaques in Spanish and English telling the history.  Sadly everything is in a state of total disrepair and  it appears little is being done to preserve this heritage.  There is also the handsome Customs House building from 1630, guide books tell us that it has been beautifully restored, well whoever paid for the restoration needs to take a good look and find out where their money went – it didn’t look like it had been restored in the last century.  It has that very well weathered, crumbling and neglected look to it that we loved about many of the buildings in Europe. 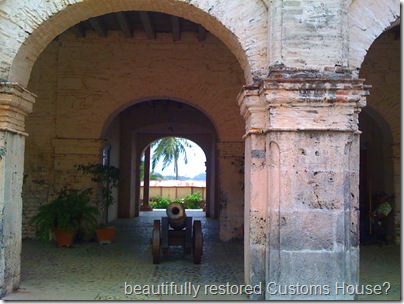 More rubbish rantings!
The rest of the town has a “wild west frontier” kind of feel to it, almost as though everyone is just passing through.  But it eventually grows on you and really could be quite a nice spot with a touch of t.l.c but everywhere you look is just a shambles.  Nearly all the buildings are concrete block and plaster and most are falling apart, several have already fallen and lie derelict.  Rubbish is absolutely everywhere, every now and then it looks a little cleaner but soon after it was just a big tip again.

The residents have no sense of pride in their environment and obviously no concern for the health issues all this decaying rubbish brings.  There are no bins anywhere and the collection point for rubbish bags (including those of us cruisers who pay $1 a bag to leave it) is on a vacant lot adjacent to houses and the Port Captains office – right “downtown”! 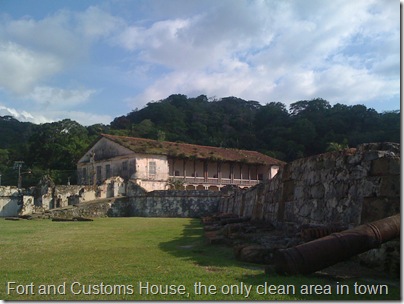 Big black buzzards or maybe they were vultures hover overhead waiting for the next instalment to arrive and stray dogs scavenge thru the pickings, it is so bad it is almost unbelievable.

An American owner of one of the local bar/cafe/backpackers hostel Capt Jacks endeavoured to do his bit to help clean up Portobelo and employed someone to work full time removing the streets of their litter.  The new employee worked a few days, collected his pay, then disappeared with tools of the job supplied by Capt Jacks, never to be seen again!  And so the rubbish keeps piling on up. 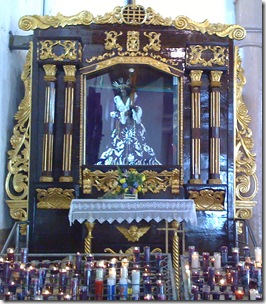 The Black Jesus
There is more to Portobelo than ruins and rubbish, there is a church in the town square with a statue of the “Black Christ” in it.  There is many a tale of where this statue came from and when it first appeared but it has developed into a major pilgrimage site for Central America, with thousands visiting each year hoping for a miracle.

Boring things like The Weather and Boat Jobs
So we have stayed in Portobelo nearly a month now, our least favourite anchorage in Panama but our longest stop, something doesn’t seem quite right there.  Generally the wind is from the east/north east and then it is a comfortable and flat anchorage, however with a westerly in the bay or even miles offshore, quite a chop and sometimes a swell comes in making it rather uncomfortable and on a lee shore, never something we like. 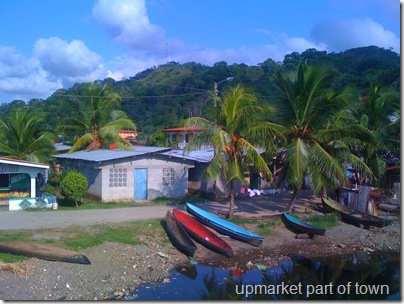 Someone told us it is officially the wettest place in the Northern Hemisphere and it sure does get its share of rain but in fairness we did actually have 5 consecutive days when we got sunshine nearly all day, unheard of normally in June.  The thunder and lightening has not been nearly as bad as when we were in the San Blas, it is often around us in the mountains but not overhead.  That alone has been a major bonus.

The days have passed quickly enough, there is always something to do/fix onboard.  Plus skipper has been lucky to find El Castillo a local bar with English owner who has been showing all the European Football Cup games live and we finally managed to get a sim card for our dongle so have internet access once again.

We have almost returned to the real world! 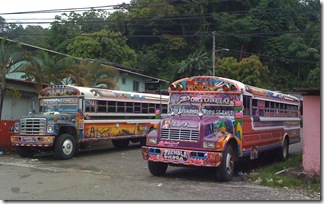 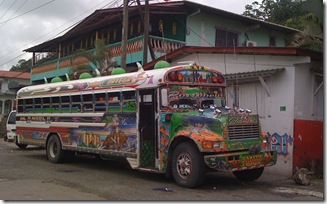