Downwind – Not a Good Reintroduction 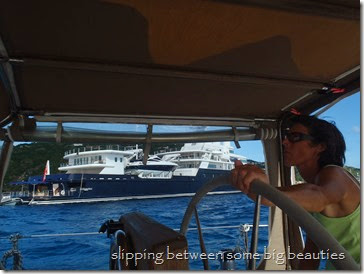 We ended up staying in Low Bay on Barbuda an extra day due to the weather.  When we awoke to the alarm we heard the pitter patter of raindrops - the skies had opened and the water tanks were filling up nicely, there wasn’t much wind for sailing so after a quick predawn board meeting we rolled over and went back to sleep!  The bonus was that we got to have another farewell dinner with the Ruffians, they hadn’t fancied leaving in the rain either.

Next morning it was another predawn start, skies were clear, a light breeze was due to build and it was time to start heading Balvenies bow west.  We waved goodbye to Ruffian who were heading down the chain, motored out through the reef and raised the main.  We were finally sailing off downwind, the moment we had been waiting for. 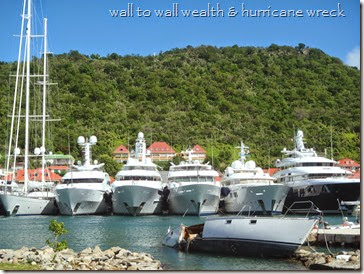 For well over a year now we have had the wind in front of the beam, often we have been hard on the wind but now we could ease the sheets completely and float off downwind.    But that of course is in the ideal world, not in the one we sail in.

Firstly there wasn’t enough wind to sail so we motored the first 2 hours.  Then once we cleared Barbuda we experienced a very messy and sloppy sea state, along came the wind and things were ok for a while, then came the squalls which we were unable to avoid so we hastily put 2 reefs in the main, then the wind died after the squalls so we wallowed with not enough sail … and that was the pattern for the day.  11 hours and 64 miles later we pulled into the very busy harbour of Gustavia on St Barts, not a great days sailing but not a beating!

Playground of the Very Rich & Famous 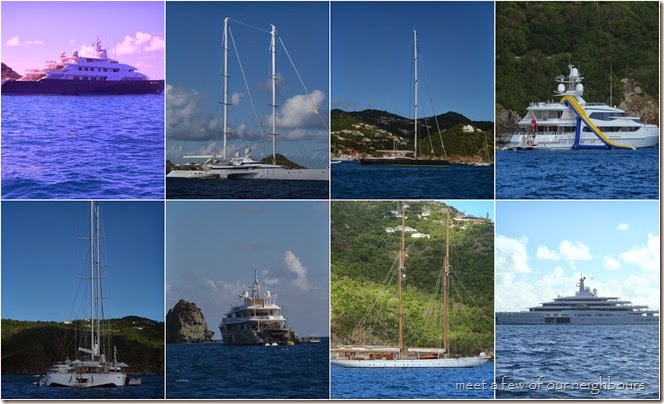 It seems the 100 odd miles between Anguilla to the north and Antigua to the south is the playground in the Caribbean for all the superyachts, both sail and motor. 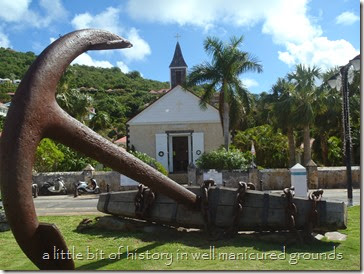 St Barts is very French, rather small, cute, exclusive and expensive and is draws these vessels like a magnet.  For those that like to be seen, well this is THE place to be seen in the Caribbean.  For us mere mortals, well we took the hint that we didn’t look the part when we were looking in the window of an expensive watch store and the shutters came down over the windows!

But we were not deterred and spent 3 nights in the busy anchorage watching the constant stream of superyachts pass by.  We even ventured underwater and did a snorkelling excursion to the nearby small islands.   A circumnavigation of the smaller island was one of the more rewarding snorkels we have had this year, clear water and an interesting  variety of coral and fish.  I wonder how many of the superyacht guests take the time to look at these natural gems, and not just the ones in the glitzy jewellers. 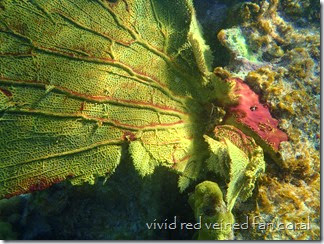 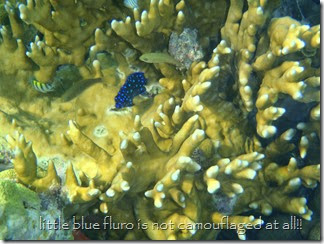 Two Miles Away but a World Apart
We moved just a couple of miles around into delightful Colombier Bay, only the very cheeky superyachts dared to squeeze in, a few charter boats came and went and the rest of us were long term cruisers, it was great to hook back in and enjoy social activities organised.    Access to this remote bay is either by boat or about a 15 minutes walk along a well worn but rocky track, then another 10 minutes to a tiny hamlet consisting of a car hire depot, minimarket (with fresh baguettes) and cafe with espresso machine and wifi.  Great reason to get our daily exercise. 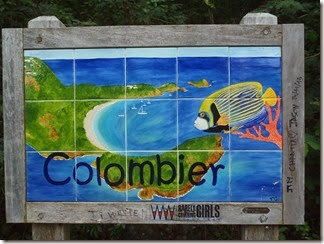 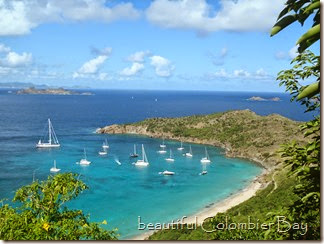 Happy hours were a time when everyone that wanted to gathered on the beach and told tales of their latest woes, adventures or misadventures, shared knowledge on anything from supermarkets to stern glands, but primarily just gathered and enjoyed like minded cruisers company and watched the sun slip away for another day.
We Wish You A Merry Christmas

Christmas morning started slowly with Mulled Wine abroad Irish yacht Karma, a tradition of theirs that they kindly invited us to share.  Then mid afternoon Australian Mark from Sealife joined us for a Roast Chicken with all the trimmings, followed by some very alcoholic chocolate brownies, not quite Christmas pudding but there were no complaints.  Santa failed to notice I had removed a dorade so he could gain easy access so there were no presents under our midget christmas tree. 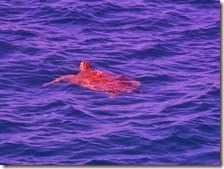 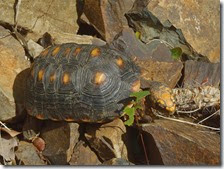 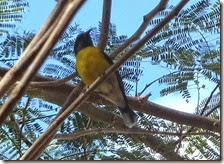 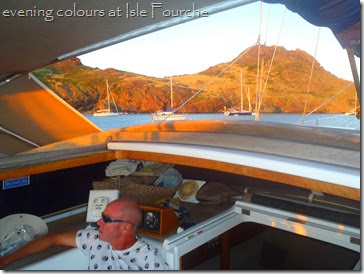 3 More Miles Up The Road

We moved on to the next small island of Isle Fourche for a night.  It was entirely different to St Barts, dry and barren with hardly any vegetation.  It is privately owned but there are no dwellings at all ashore, visitors are welcome to explore so we launched the dinghy, timed the surf and successfully landed on the stony beach.

We spent a couple of hours hiking around, scrambling up rocks to get to the best view points and watching the stream of superyachts heading towards St Barts for New Years Eve. 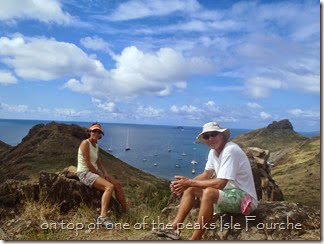 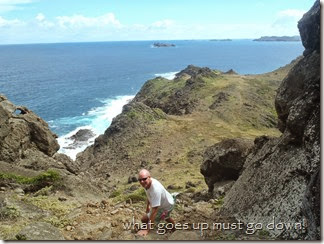 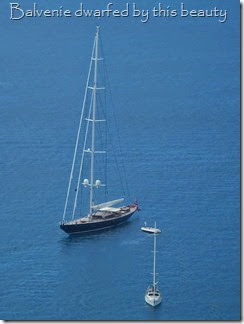 St Barts had been an enjoyable stop, the 3 anchorages were all quite different and watching all the superyachts and seeing their expensive array of toys had been fun.  We decided to move on to St Maarten even though St Barts is the IN place for New Years Eve jetsetters, maybe just a little out of our league and price range though.

It was just a short sail with the headsail downwind across to St Maarten and we eased into the shallow bay of Philipsburg on the Dutch side late afternoon.  4 huge cruise ships were lined up along the dock, small boats ferried the 1000’s of passengers back onboard from their day in St Maarten.

The ships provided us happy hour entertainment as one after the other set sail at dusk, colourful lights blazing, a new destination for them at dawn.