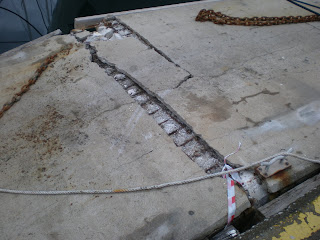 ***This was L dock at Netsel, it just sort of buckled upwards and snapped, at least it stayed in one piece!!***The storm came from the south and brought with it plenty of African dust, it rained mud for a few hours***Very unfortunate sight at Netsel Marina, luckily major damage avoided by landing on the building***The cockpit was clean before but it just blew dust and dirt***

While parts of France and Spain have been badly damaged and lives lost in dreadful storms, little ole Marmaris has unfortunately been getting its share also, although luckily not as bad. We were forecast to receive a storm from the south with gusts to 50knots to arrive overnight Friday night. As with most of the weather forecasting here it was pretty accurate, but it just built and built and kept building. 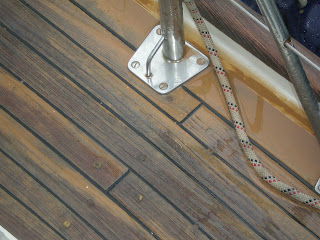 Arriving in the wee small hours and building to 40knots quickly we were hoping for a short sharp blast and then resume normal quiet life but by daybreak things were still building. The yacht pictured had left their headsail on and not locked it off properly, the wind caught and unfurled it, of course making the yacht want to sail away, with devastating consequences. While this was going on our dock decided to part company with the main concrete pontoon, it was still all anchored and chained down, but no longer attached to solid land. Not a reassuring thought as the winds kept building. Then the cleats on the docks started popping out of the concrete pontoon, as each one went it then meant that the boats attached to it were no longer attached to the dock!! All hands were on deck, including all liveaboards, marina and charter boat staff to retie to other cleats, of course adding extra load to the remaining cleats, but desperately trying to keep the boats attached. 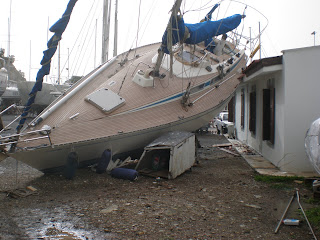 Still the wind was building, our cockpit wind instrument peaks at 50 knots, it was being pinned on 50 knots for minutes at a time. The noise was horrendous, the spray and sea state in the marina unbelievable, and still it kept coming. We were now getting gusts over 70 knots, and the highest recorded was 76knots, that's way too high. We were watching the clouds build and build, desperately hoping for the rain to start which usually settles the wind down, but more carnage occurred.

A few bow lines broke on boats around us, necessitating the marinaros to take temporary lines into the tender and go across the marina to attach to the far docks. Once the bow lines go there is nothing to stop the boats from falling back onto the dock, damaging their sterns or from being pushed by the wind onto the boats adjacent.

Meanwhile there was minor damage occurring everywhere, awnings shredded, dodgers blown away, the plastic windows in our canopy were blown out, fenders were popping, mooring lines shearing, dinghies flying off decks - then at last around 10.00am, the rain came and the winds 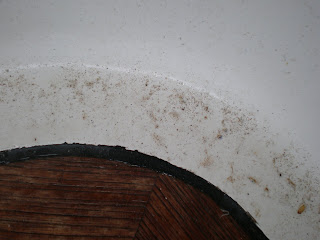 started to ease. I remember coming below and thinking how quiet it was now the wind had eased, I looked at our wind instruments and we were getting 38 knots - NEVER have I thought 38 knots was peaceful!!!!!

The heavy rain, actually falling African mud, lasted only a few hours but what a mess it made, it looked like we were to be covered in a layer of clay when it set. So we have been cleaning up since, Mark has hosed all the dirt away inbetween downpours, I have fixed 2 of the windows but am awaiting the easing of the rain for long enough to remove the canopy before I can fix the last one. The marina staff are trying to get the marina back together again, power was only out for about 7hours, water is still off on our side of the dock, and we still have to walk over 18 lines that run across our dock to get to the end as they can not bed new cleats in the rain, its like doing a 200metre hurdles!!!!

Overnight we had another blast of 40knots through and we sat and prayed for nothing higher and it looks like things will calm down for a few days. We shall be very glad when this is all over, the wind dies, the rain ends and the sun comes back to play.

See video footage of the storm at Yacht Marina on http://www.mefeedia.com/entry/storms-in-marmaris-yacht-marina/13883291