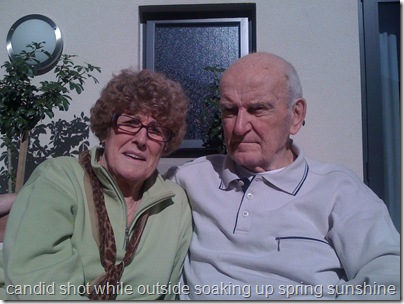 Another visit home draws to a close

The worst part about coming home is the goodbyes, it never gets any easier and this time it was even harder.  Dad is now settled into his Dementia Care Facility and seems happy enough there.  Dementia is such a nasty disease affecting many people much younger than Dad, who at 84 has had a full and healthy life until now, however it is still very hard to witness its cruel effects on one you love.  The carers at Edmund Hillarys Special Care Unit are extremely patient people who show compassion in some very trying situations, we are confident that they will treat Dad with the respect and care he deserves.. 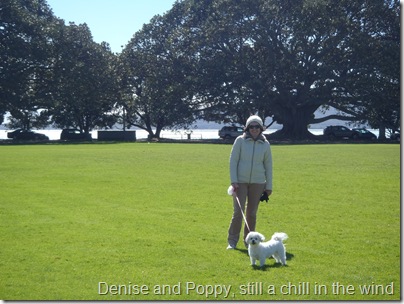 For Mum it has been an extremely difficult transition, she still has her husband of 56 years, but not as she knows him and not by her side.  She is coping as well as can be expected and slowly coming to terms with her new life, mainly without Dad.  We are very lucky that their apartment is in the same retirement village and she can even journey through a maze of hallways to visit Dad daily without even having to step outside.

My sister Denise and her husband Robert have been great hosts,  they welcome us into their home for weeks on end and their hospitality and generosity are always so very much appreciated.  Poppy, their very cute dog, keeps us all entertained with her antics – hiding in our wardrobe, burrowing under our pillows, often up to no good!

We have caught up with everyone we could and had some great evenings out and in with many friends we see infrequently but who always make us so welcome when we are home.  Thanks to you all, its been great catching up and to those of you we missed this time we apologise, we’ll get you next time around. 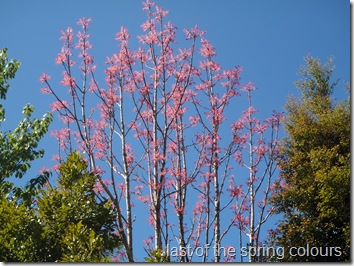 All The Bags are Packed

After a couple of days packing, repacking and then moving a few things around the weight is finally distributed reasonably evenly and we just slip in under the airline limits.  Check in with Air New Zealand is effortless, there are only 3 people in the queue before us and no one behind us yet the flight is full – where is everyone?  Slight confusion ensues when I reach passport control, the benefits of having two passports are making life a touch tricky!  I had arrived in NZ on my Irish passport as my NZ one had expired.  Upon leaving I checked into the flight on my new NZ passport as it has my new US Visa in it, however – I used my Irish one leaving at passport control so I would not get flagged as an overstayer but that passport number wasn’t loaded on the flight manifest. 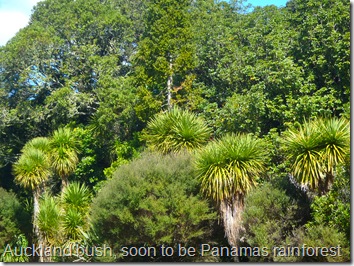 Yes I know it all sounds very dodgy and it did take quite some explaining but we got there in the end and permission was granted to leave New Zealand!!!

Leaving on a Jetplane ……

Once through to airside we discovered where everyone was, perched wherever they could watching the All Blacks playing the Pumas, truly a Rugby nation – the final score was even announced on the plane before takeoff (but Denise had texted it quicker!!!)  The 12 hour flight to Los Angeles was ok, a couple of movies, a couple of meals, a couple of hours sleep  and we were there.  We returned to the Airport Marriott and had a lovely room with balcony and courtyard view over the pool area, a definate improvement on our previous stay. 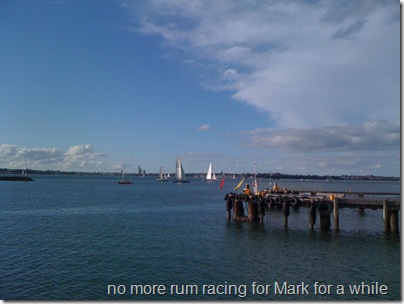 It was the hottest day in LA for 3 years and my body soaked up the warmth.  For Mark it was the start of a heat endurance test which will now last for some months and warmer climes to come!!  We had a rest, stretched our legs with a long walk, ate dinner in the Sports Bar which had 31 televisions and most of them had different channels on, it was an absolute feast for Marks eyes, for me – well I just went crossed eyed very quickly!

We just had the one night in Los Angeles and early next morning left on our Copa Airlines flight heading back to Central America - 7 hours later we touched down in the rain in Panama City. 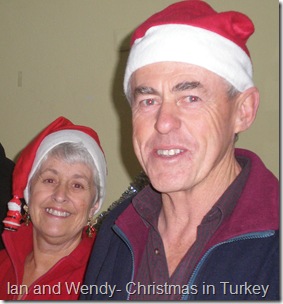 Taking Time Out for some Cruising Yarns!
We have met some great people during our 8 years away cruising, some of them were back in Auckland while we were home so it was time to look them up and catch up with what they were doing.

We drove into Westhaven Marina on a sunny Saturday morning and met Ian and Wendy off Remedy, like us they left Auckland in 2004, we met them at our first destination, Musket Cove, Fiji.  After that our paths crossed a few times and we last saw them in Turkey 3 years ago.  They completed their circumnavigation at the end of last year, Remedy is now tied up on the Sales Berth in Westhaven Marina eagerly seeking a new owner to take her out and explore more of the world, (she’s a lovely boat if you are in the market!).  Meanwhile Ian and Wendy are planning their next adventure to South America (by plane!), with a side trip cruising down to Antarctic on an Expedition Vessel – can’t wait to catch up with them again next time to hear all those stories. 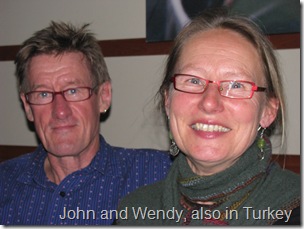 We shared a few evenings with John and Wendy off Beyond.  We first heard of Beyond on our daily SSB Radio Cruisers Net whilst crossing the Indian Ocean and heading for “Pirate Alley” into the Red Sea.  When we finally met them in Turkey it turns out that Wendy is English and her brother went to school with Mark in Kent, meanwhile John is a Kiwi, such a small world!  Like Remedy they too completed their circumnavigation last year and are slowly adjusting to “normal life” – with difficulty!  They sold Beyond back to the people they had bought her from – with just a few thousand miles added, how handy is that?  Mark encouraged John and Wendy to spend a few Thursday afternoons out “rum racing” with the Stewart 34s, so they are getting a taste for life back at sea again. 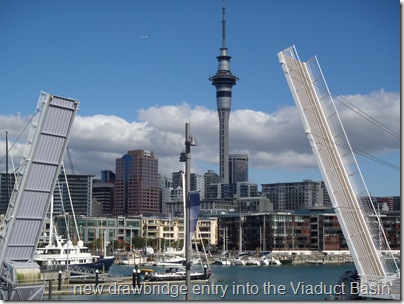 We caught the bus into the Viaduct Harbour and met up with current cruisers Jean and Alan off Tuatara.  We first met them in Morocco although we had “known” them via the SSB Radio Cruisers Net for a couple of years previously.  They too crossed the Atlantic this year and we last caught up with them on  the cute Caribbean island of Bequia back in January.  There we are in the photo below; all kiwi cruisers – rum flowing, golden sands running through our toes, sun shining, warm Caribbean waters lapping at the shore of our private beach, trade winds howling!  Also in the photo is Bandit (more on them in a minute) and Irene and Chris off Cuttyhunk, would have loved to have seen them at home, but they have been homeward bound since we farewelled them from in Grenada in February, soldiering on across the Pacific currently in Tonga, only weeks away from returning to NZ waters.  Meanwhile Tuatara is still in the Caribbean laying in Trinidad awaiting Alan and Jeans return next month, our paths at sea are unlikely to cross again so it was great to catch up with them on home soil.

Auckland put on a absolute stunner of a day when David and Brenda off Bandit flew in from the Marlborough Sounds and met us for a long lunch on the waterfront in St Heliers.

We have shared many an anchorage with them this season since the Canary Islands - we started our crossing of the Atlantic just a couple of days behind them, leapfrogged each other down the Eastern Caribbean Chain and then we “buddy boated” across the Southern Caribbean islands, finally parting ways in Colombia in May when they headed for Guatemala, where Bandit awaits their return, and we to Panama.  We talked of our plans for the coming season and it looks like a reunion in the Bay Islands of Honduras is on the cards, can’t wait.  They are fun to sail with and its great to have company along the way for those well earned sundowners on balmy tropical islands, ah doesn’t that sound delightful (especially on a chilly Auckland day!) 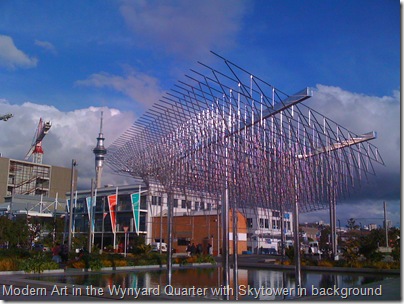 Exploring the New look of Auckland
Although we have been quite busy ticking all the tasks off the “to do” list we have managed to slip in some time out for being tourists at home in Auckland.

For those of you that aren’t rugby followers you will be unaware that New Zealand hosted the Rugby World Cup last year.  This great sporting event encouraged thousands of tourists to visit New Zealand shores and Aucklands waterfront area benefited with a huge revamp.  Many old derelict buildings have been renovated and turned into swanky bars and restaurants on Quay Street which has seen this previously rather seedy area turned into a vibrant popular spot, both day and night. 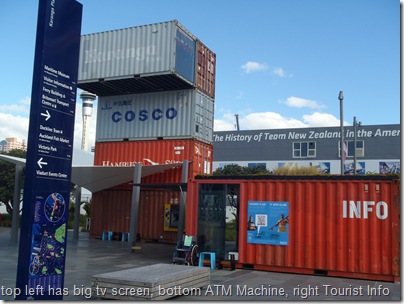 An enormous tidy up in the disused tank farm adjacent to the Viaduct Harbour has seen this area rebranded as the Wynyard Quarter.  Its outer fringes have been turned into a “hands on” park with many interactive activities to entertain young and old.  The photo to the left shows a pile of containers, but look closely as here they are a modern art feature – the ends of the top left one has huge tv screens in it, whilst the bottom one houses a Cash Machine.  Adjacent is the Container Tourist Info Office for the neighbourhood, all very well done and blending into the funky environment that has been created. 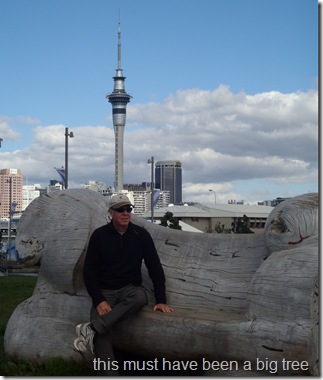 Close to the Viaduct a handful of new restaurants have sprouted up, all large establishments offering a selection of delectable treats to entice the thirsty and hungry passersby.  But this is not an area of much foot traffic so it will be interesting to see how they are all surviving next time we are home, we hope they do well and it is encouraging to see this part of the downtown area all spruced up.  Access across to the new Wynyard Quarter has been made easy by the addition of a pedestrian drawbridge across the entrance to Viaduct Harbour, making the journey by foot just a couple of minutes.   It’s great to see this whole area now have a buzzy feel to it and to have it linked across to the rest of the Viaduct area.  Well done to the town planners for this improvement to our great city of sails.
No comments: