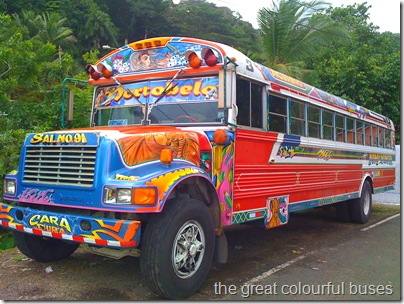 The San Blas to Turtle Cay
Moving on from the wonderful San Blas island group was something that just had to be done, we were low on food and out of money – the time had come.  The winds were light for our 35 mile trip along the Panamanian coast but there was a 2 metre swell running, kicked up by some strong winds blowing once again off the top of the Colombian coast.  We motored some, then sailed some then motored some more – rolling from side to side as we went, not ideal but the swell was forecast for a few more days so we just retrieved our “sea legs”, wobbled about and got it done. 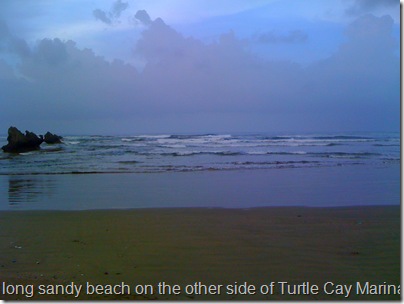 We arrived around 4pm at our destination for the day Green Turtle Bay, a tiny indent of a bay around a headland in between a couple of reefs.  As we dropped the sails we really had second thoughts, the anchorage was listed as having all round coverage but with the swell running it really didn’t look like a safe option.  However, we knew that a small marina had recently opened with a hidden entrance in the south east corner of the bay, but we had no US dollars and we had heard they had no facility yet for taking credit cards, hmmm.  Then a dinghy came whizzing out from the invisible marina entrance and offered us a free berth for the night - how good is that !!.    We followed them in through the narrow gap between the reefs and tied up in the small newish Turtle Cay Marina. 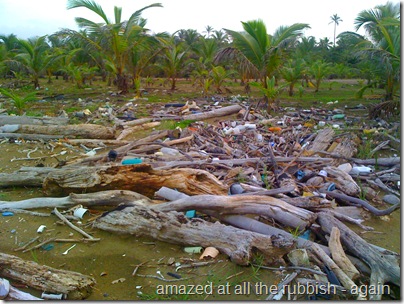 What an unexpected treat to be moored in a marina again and to just step ashore and go for a long walk, something you can’t do in the San Blas because all the islands are so small.  We walked across the small headland and back along the way we had just come, a wonderful long sandy beach with plenty of breakers rolling in, yes it had been rolly out there!  Sadly above the high tide line was the now familiar sight of rubbish, rubbish and more rubbish all quite well camouflaged here by big logs and driftwood – what a mess.  Maybe it’s time we took a trip back down the west coast beaches of New Zealand for a reality check but I really can’t imagine there is anything like the amount of litter that is now commonplace over here, we certainly hope not. 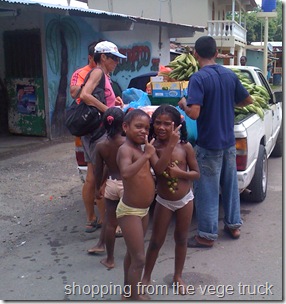 We just stayed the one night at this marina in the middle of absolutely nowhere, we didn’t even spot a road to it although guess it was hidden in the jungle somewhere.  The staff were friendly and very helpful and there were works going on to get the facilities in place for the marina to be fully operational in the very near future.  (Excellent free wifi already working)

Turning South to Isla Grande and Isla Linton
We motored once again in glassy but wobbly seas along the coast to the end of the “flat” bit at the top of Panama, before turning southwest towards the entrance to the Panama Canal.  Our next stop was to be Isla Grande, famous for an excellent surf break during the trade wind season. As we approached the anchorage the swell was still rolling under us so we gave it a miss and headed south another mile or so to the next option of Isla Linton. 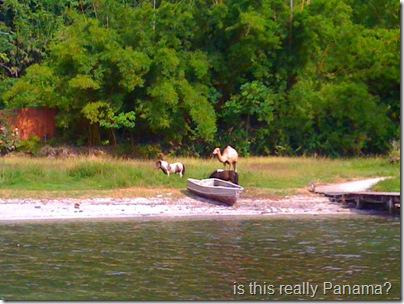 What a great spot, surrounded by rain forest with all round protection and absolutely flat water.  It was no surprise to find the anchorage busy, but there was plenty of room for us and once we were securely anchored we hopped over the side for a cooling dip (are there crocodiles here?) commenced happy hour and sat back to listen to the most amazing jungle noises in stereo surround sound.  When Skipper mentioned he could see a camel onshore I thought the heat had finally got to him, but there it was, along with two Shetland ponies grazing at the waters edge – not quite what we were expecting to see as our first “jungle wildlife”! 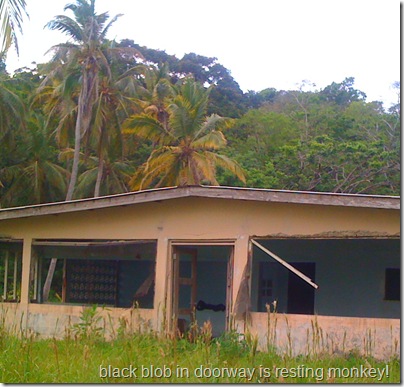 We stayed a few nights in this very laid back place, the small village ashore had a very dark and gloomy grocery store, so dark you could not actually see what was on the shelves, but most of them were empty anyway - but in fairness the power was out.  We found this out when we went to a cruisers and backpackers bar on the waterfront (basically the only other business in town), it had wifi, but of course it wasn’t working cos the power was out – Welcome to Panama, I suspect it is something that we will get used to over the following months!  We spent some of our last dollars with the mobile vege truck, enjoyed some bush walks then eventually lifted anchor and motored the last 10 miles to civilisation at Portobello - (but not as we know it!)
No comments:

Email ThisBlogThis!Share to TwitterShare to FacebookShare to Pinterest
Labels: Panama 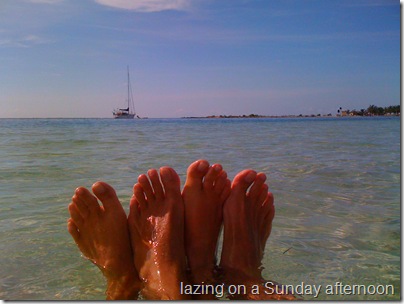 East Lemmon Cays
Leaving the Swimming Pool anchorage in the East Holandes Cays wasn’t an easy thing to do, but all good things must come to an end.  We motored out through the islands and reefs and moved a few more miles west to the eastern anchorage of the Lemmon Cays.  We were moving closer and closer to “civilisation” and this was the busiest anchorage we had been in for a long time with day tripper boats, people camping in tents ashore – all this activity we were no longer used to!  The bonus was a visit from another vege boat, and although we still couldn’t buy milk or bread we did top up on chicken (yes still with head and feet) veges, wine and beer.  So happy hours and dinners for the foreseeable future were looking ok but unless we got some milk, cereal, bread or flour soon it was going to be black tea and fruit for breakfast and no morning lattes – problem! 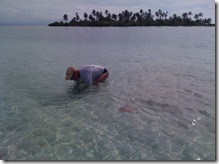 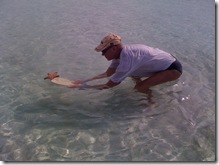 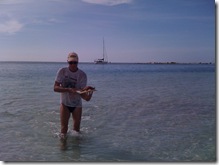 so just what is Skipper doing????? 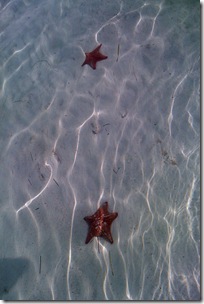 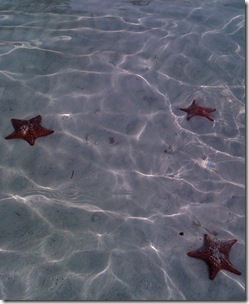 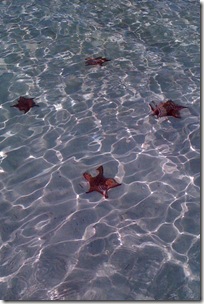 he is building the Southern Cross – with starfish! 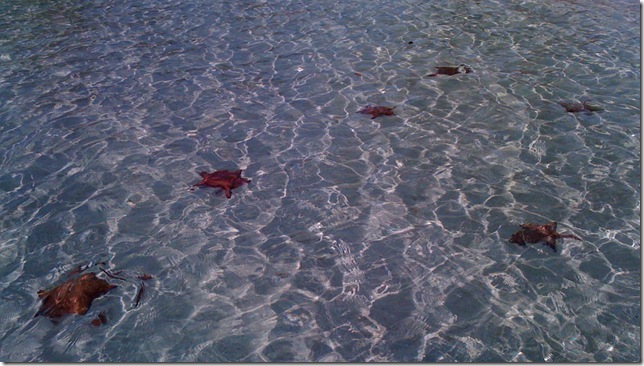 We stayed a few nights, enjoyed some swimming and snorkelling, and starfish relocation - did some more jobs, avoided a few more lightening strikes and felt very sorry for those onshore camping!  When we got to the last of the milk it was time to pull the anchor up and head for some sort of civilisation. 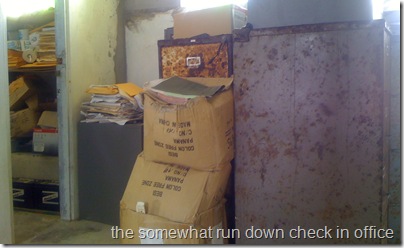 Porvenir seemed the obvious choice for our next stop.  Not only did it have an airstrip, hotel and restaurant, but it also housed Immigration and the Port Authority.  However that basically was all it had.  The airstrip was currently under reconstruction so the “hotel” looked closed and the restaurant was marginal.  But the Immigration and Port Authority offices were open so after nearly 6 weeks in Panama it really was time to check in and become official.  I will mention that this was the first place we could check in and it is accepted that yachts coming from Colombia via the San Blas can take a while. 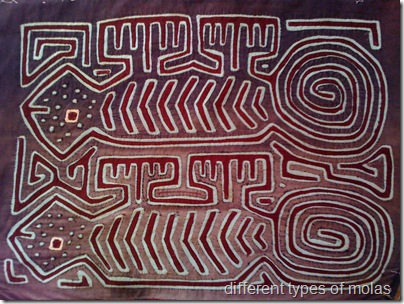 So the process began -  Immigration wasn’t so bad, just a detailed form each to complete and our thumb prints taken, now that was a first.  We were issued a visa for $50 USD each, we are actually not clear if it is for a year or 6 months, we had heard sometimes it is free, sometimes $10, sometimes $100, guess we did ok with $50.  Next was the Port Captains office, out came the typewriter and form after form were produced, such a relaxing way to spend an afternoon, shame there was no air conditioning.  I’m not actually sure if they even had power, they did have cell phones but the local cell tower was down so no coverage!  Our “Cruising Permit” for a year in Panamanian waters cost $193 USD and then there was our exit papers from the San Blas a bargain at just $17 – we came away with a seriously big dent in our remaining US Dollars and ruled out the possibility of trying the basic restaurant for dinner. 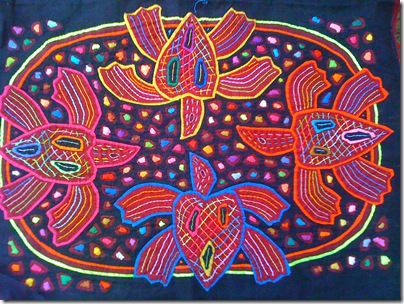 The anchorage was ok so we stayed the night and dinghied the short distance over to Whichiwhatever the next morning, armed with shopping list and our few remaining dollars.  The waters surrounding the island were slightly cleaner than we had previously experienced and the main part of the village was orderly and quite clean but the periphery was another big dump site, I simply don’t understand why the Kunas don’t keep these minuscule islands they live on clean, therefore providing a much healthier and way more pleasant environment.   The main “store” was much like the ones in Nargana – disappointing, however we got the main items we needed, milk powder, flour, and corn flakes (the only cereal).  Luckily we didn’t need produce as there were only a couple of pumpkins.  Had we wanted crisps, cookies or beans and pork in a can we could have loaded up, it seems these may be the Kunas staple diet. 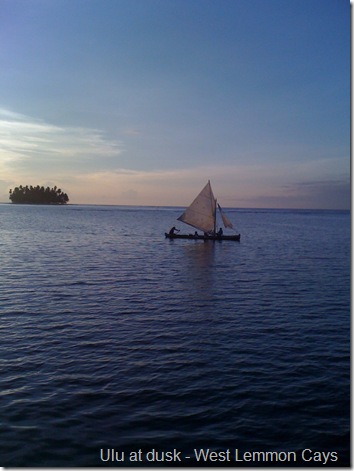 West Lemmon Cays
We backtracked a few miles and glided over the 2.5m shallows at the southern entrance into the West Lemmon Cays.  First impressions weren’t great, the main island wasn’t the cute picture postcard perfect we had come to expect, the anchorage was much deeper than charted BUT there was a tiny shack ashore that was a bar with plug-in internet.  We stayed 4 nights and took care of overdue business when the internet worked (not often).  The bar was a bar with no staff really, they just lay around in their hammocks until you called enough times, then maybe they would show some interest.  Certainly not keen business people looking to make a buck out of us yachties, but they did serve cold beer.

We enjoyed some snorkelling off the bottom of the island which provided some of the most colourful corals we had seen in a while but very few fish.  We survived another thunder storm with the strongest winds so far, nudging at 28 knots.  But it was time to move on, we were virtually out of dollars and there are no ATMs anywhere in the San Blas.  Paradise had been great but it was time to return to the real world, we hadn’t even seen a car in over 6 weeks and the cupboards really were starting to get a little bare.


Time to see what else Panama has to offer
No comments: