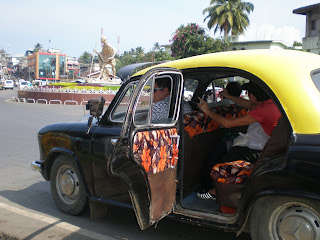 01 - 22 Jan 2008
CLICK ON ANY PHOTO TO ENLARGE ***Stopping at the gold Ghandi Statue in downtown Aberdeen, Port Blair - our driver was very proud of his car and new floral orange and brown upholstry***Group shot of the wild elephant hunters at Interview Island - Vivienne, Sal, Mark, John and Amanda (Alastair taking photo)***3 blokes and 3 boats, John, Mark and Alastair ashore for another excellent barbie on North Reef Island***

We were once told that “you either have a fast passage or a comfortable passage – very rarely both”. Unfortunately this was not one of those rarely both occasions and we had a fast passage, beating to windward in some very strange seas. We had heard from the boats that crossed last year that the Andaman Sea (between Thailand and the Andamans) could be very confused, lots of counter currents, volcanic ridges and mountains underwater, no exit for the tides as they

enter into the Bay of Bengal, all contributing factors to yet another ocean washing machine, on an extended agitate cycle. Every now and then we would get an hour or two of flat water and we would get our hopes up that things had settled down and it would be like this the remainder of the voyage, however that was just the washing machine resting on the soak cycle before launching into the spin cycle!!!!
Less than 48 hours after leaving the Surins it was ‘land ahoy’ as the entrance to Port Blair was sighted through the mist.

MORE TO COME WHEN INTERNET ACCESS ...OK , its now January 2009, year on and I am now starting to work on finishing these..please be patient, I'llget there soon 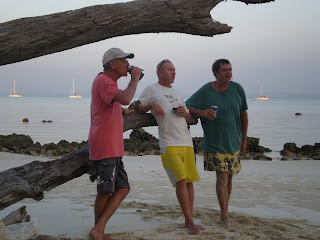