Snapshot of the Festival 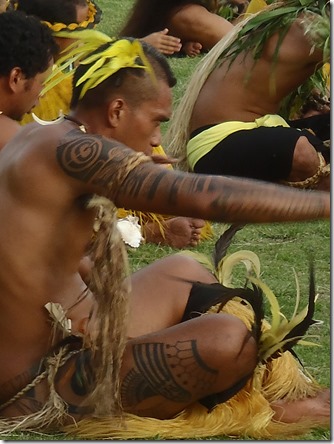 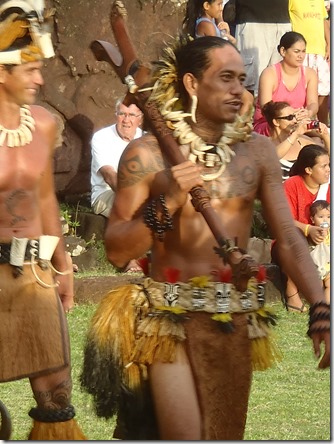 Now that the 4 yearly French Polynesian Festival hosted this year down in Hiva Oa has passed, I can post a few photos of the “advanced screening” festival we saw here in Nuka Hiva a couple of weeks ago that I wrote about on the pre Christmas blog. 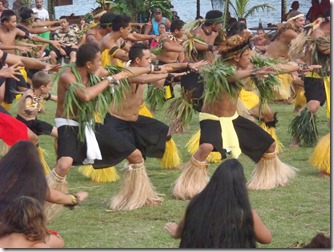 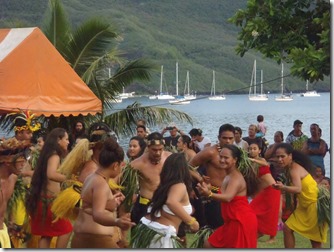 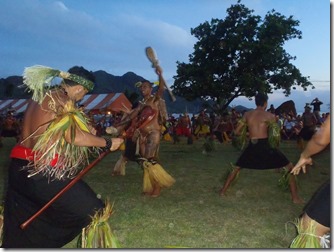 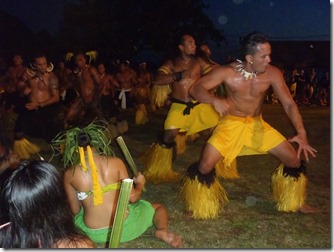 Definitely Time for an Adventure 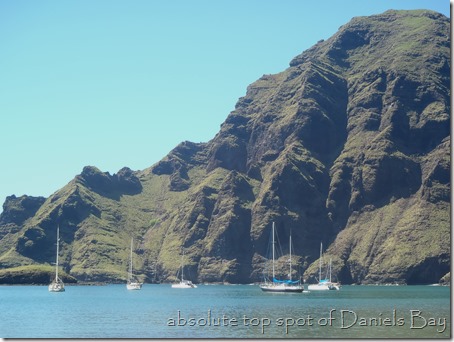 We were settled in Taioha’e but it was time to clean the anchor chain of its barnacles, give the engine a workout and move the short distance of 5 miles around to Hakatea a.k.a Daniels Bay, so in company with Libby & Desire off we went.  We motored through the narrow entrance then veered right – wow, we had arrived in paradise.

This is a stunning anchorage with majestic towering cliffs dropping vertically into the bay on the western edge, and a white sandy beach lies fringed by coconut palms on the eastern shores.  It is totally enclosed and  almost perfect.  As always, paradise comes at a price, annoyingly there is a pesky fly population and they had engulfed us before we had even finished anchoring!, however they were a price worth paying. 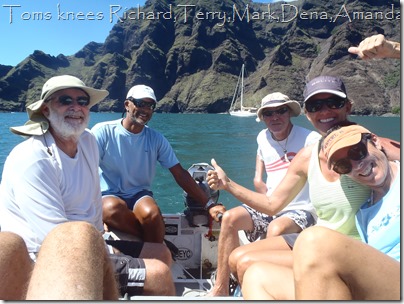 We had just a short time to play with  Libby & Desire before they left and sailed off to Hawaii so we were all up and out next morning to do the famous Hakatea Waterfall Hike.  This waterfall is reputed to be the 3rd highest in the world, its remoteness makes it accessible only by boat then foot, the hike has two river crossings with no bridges and the falls sit hidden away at the end of a narrow beautiful valley.

After the recent rains the water levels were high, the river ran swiftly, the breeze was non existant and the mosquitos out in full force.  The walk and the scenery were stunning, the path follows an ancient walkway, worn and moss covered ruins of a stone wall built in the days when this valley was home to thousands of Marquesan flank the trail.  This valley was one of the most populated settlements in the entire island group, well developed before the “white man” came and numbers declined dramatically. 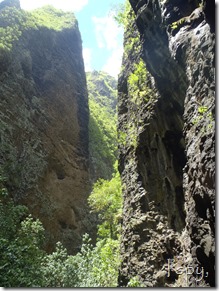 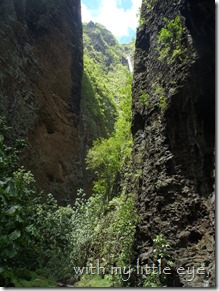 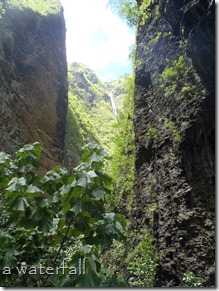 We passed final resting places for deceased Kings, hidden high on ledges on the sheer rock walls, the engineering feat of building the scaffolding to place these remains must have taken months, 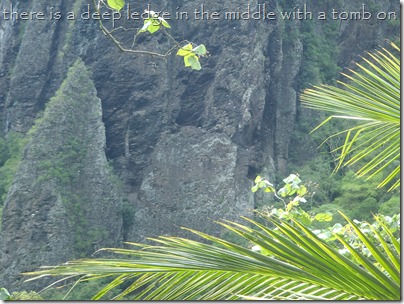 but the Kings had to be kept from harms way and inaccessible to enemies, and this was the chosen resting place.

We passed stone foundations of a large settlement, the lush vegetation slowly reclaiming it back to the jungle.  The further we hiked the narrower the valley got until we were surrounded, and the well earned prize of the waterfall towering above,  proudly displaying its full force after the recent rains.

The water was chilly, but for once I braved the cold as the best view could only be had by swimming in.  We ignored the eels sliding around in the shallows and hoped they would ignore us too, 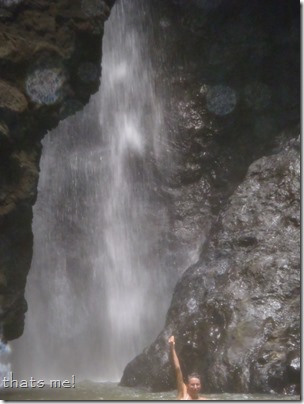 waded in, climbed over a rocky barrier and finally made it into the pool at the base of the falls.  The spray was like pebble fire, wind howled across with it,  the forces were intense, the waters very chilly but oh so refreshing after the hike! 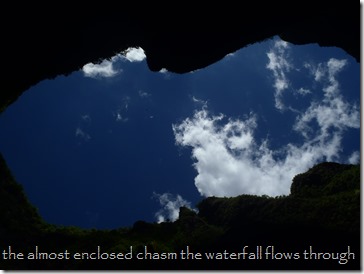 The bugs were out in full force so we didn’t linger long after our water blasting, plus our pre-booked lunch was beckoning down in the village.  The vista on our downward hike was just as spectacular, the valley opened up more every turn we took, this was truly an exceptional hike. 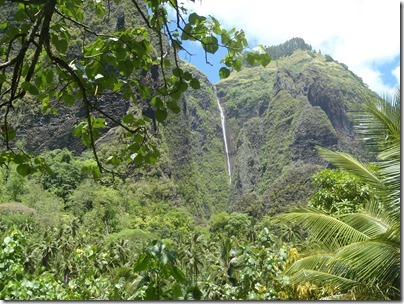 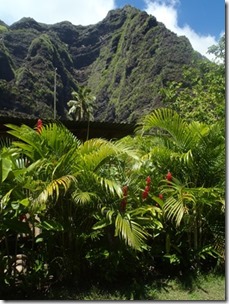 Back down at sea level we enjoyed a delicious goat & coconut curry, rice and fresh fruit.   A couple of the locals offer lunches at their homes for the wary hikers and we had ordered ours on the way through, a good move as we were famished. 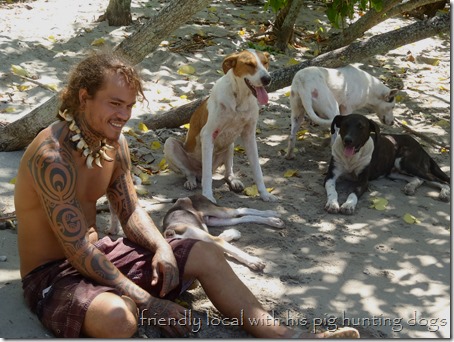 Next morning both Desire & Libby departed for the long journey north to Hawaii, sadly we will not cross paths with them again, at least not by boat.  One of the best parts of this life has been the wonderful people we have met, and the speed that great friendships can develop.  The saddest part  has been those we have had to say farewell to all too quickly,  we are truly ships that pass in the night.

We loved Daniels Bay, birdsong all day long filled the air, the only visitors a few intrepid tourists who arrived daily by local boat to do the hike, a scattering of yachts came and went, the sun shone, the waters were tranquil. 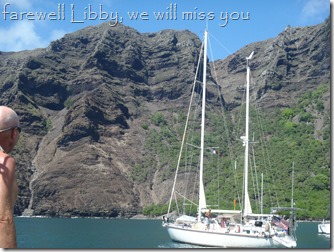 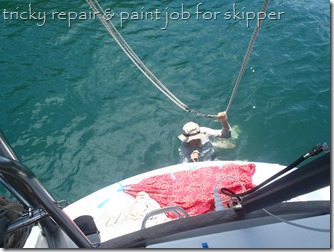 But this paradise is cut off totally, there are no roads, no stores, no phone coverage and definitely no internet so with Christmas approaching we reluctantly returned to civilisation.

We had more dance displays when the victorious Nuka Hiva troupe returned from the big festival in Hiva Oa, they performed in full costume for a couple of hours as the sun dipped over the hills and the sky turned all shades of pink.  Just magic. 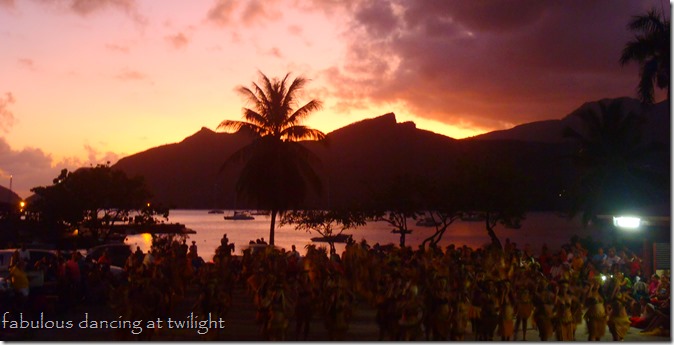