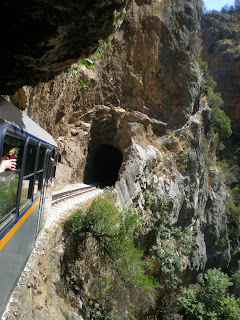 Time to move westwards again. We left the little island of Trizonia and motor-sailed until we cleared the Rio-Andirio suspension bridge, the longest suspension bridge in the world. Then it was time to practice our tacks again, just 10 today. Finally we headed up the narrow channel into Mesolongi (Messolongion) and tied up yet again in another unfinished free marina. Mesolongi is low lying and hasn't got too much going for it. The 'marina' is quite a distance to town, but nearby there is an interesting array of war planes, canons and other equipment, just sitting in a fenced off area by the port. Adjacent to this are lying several huge wind turbine parts, still shrink wrapped awaiting installation, but looking like they had been there for quite some time, undoubtedly more EU money and worth millions! We had intended to just stay the night here, but we met up with a couple of other cruising boats, Rien and Ineke on Zeezwaluw from Holland and Kit and Belinda on Quilcene from England. Kit and Belinda had just returned from an overnight excursion to Diakofto to ride the rack and pinion railway there, something we had looked at doing but thought it currently wasn't running, so with offers from both of them to keep an eye on Balvenie we planned our next mini-break.

We decided if we were to go across to the Peloponnese Peninsular to do the train journey into the mountains we may as well go a little further and visit Ancient Olympia. We enquired about hiring a car but there are no hire companies in Mesolongi so armed with bus and train timetables we set out, first by bus to Patras then by train eastwards to Diakofto. It's a small seaside town sandwiched between the Gulf of Patras and the Northern Peloponnese mountains. Not much happens here, the sleepy town centres around the train station, and a few tourists pass through to travel to Kalavryta, through the Vouraikos Gorge up into the mountain ranges and ski resorts in season. We stayed the night at the pleasant Hotel Lemonies (€50 incl breakie) and had our best meal out yet in Greece at Costas (both Lonely Planet recommendations). Next morning we were off on our train journey into the mountains. The journey takes about an hour each way and climbs over 700m in 23km. The railway was build in the late 1800's by the Italians and clings to the side of the gorge, snaking up the river side and following it up into the well wooded mountains. Back down in Diakofto by 11.15am, we started our marathon of getting to Olympia. There seems to have been no consideration given to connections onward when the once a day timetable for the mountain journey was decided. So after a very long coffee, then a dreadful cheap lunch we bordered the intercity train westwards at 1.37pm via Patras to Pygrus. We arrived after the last train to Olympia had departed which runs at 3pm!, so did plenty more waiting and caught the 6pm bus to Olympia village, finally arriving around 7pm. Olympia is a lovely little place, fully set up for the tourists but certainly not overrun at all. We checked into the clean and comfortable Pension Posidon (€50 incl breakie), then rewarded ourselves by venturing out for a well earned drink and meal, followed by a stroll around town.

Next morning we were up and out early for the 8am opening. First we visited the Archaeological Museum. It has an excellent display of votive offerings and other artifacts, and an exceptional 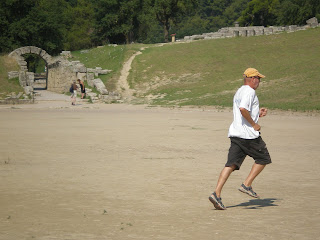 amount of statues, all very well displayed, recorded and described. Then we moved on to the ruins of Olympia, home of the first Olympic Games held in 776BC. It is so hard to imagine that nearly 2800 years ago they were staging athletic games for leisure and entertainment. We wandered through the ruins, unfortunately they are rather ruined, due to the age, many earthquakes and Theodosius II who decreed in 426AD that the temples be destroyed as they held 'pagan festivals' there. You do still get an excellent overview of everything however and the running track and surrounding area is a very special place, complete with entry archway, rock starting blocks and judges seating. Mark did a quick lap of honour, and we sat in the peaceful surroundings and tried to imagine how it must have been. After the ruins we had time for a look through the History of the Olympic Games in Antiquity Museum, also very good then headed for the train station. 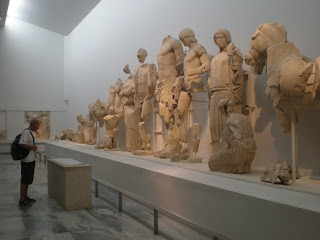 By catching the 12noon train to Pygrus we had time for a tasty €1.50 gyro (pita wrap with pork, tomatoes, onions and fries in it), while we watched the 'mobile chicken truck' selling his live wares, all jammed inside in cages, and given a periodic whack on their becks if they stuck them through the wire too far. not quite how they do it at home!!! We caught the intercity train to Patras, then had only an hours wait for the bus to Mesolongi. All was going to plan until we got stuck in a traffic jam due to road works for over an hour, something we are certainly no longer used to, but made it back to Balvenie by 6pm, worn out after two big, but very enjoyable days.