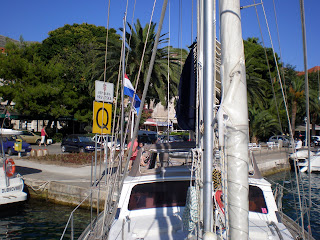 We had a couple of false starts trying to leave Montenegro. On our first attempt the engine stopped before we had let the last line go from the marina. The lift pump was not pumping the fuel through so Skipper added Montenegro to his list of maintenance in exotic places and first tried to repair, unsuccessfully, so then replaced the pump. We had had a spare onboard since our departure from Thailand so fitted it and got the engine running again. By this time we decided it was probably too late in the day to leave so stayed another night. The next day the forecast showed winds of over 35knots overnight during the next two nights, so we just stayed nicely tucked up a little longer.

We finally let the lines go from PortoMontenegro Marina in Tivat, Montenegro on 27 July and headed into the bay. About 10 minutes out the engine stopped, from memory the first time it’s ever stopped underway, but Skipper went below and bled it and it fired up again with no further hiccups. We were beginning to think we were not meant to leave!! Our first stop was the customs dock at Zelenika for checking out, there was little wind so we put all our fenders in a big pile and nudged up next to the big black tyres. Check out was quick with no charges, and no issues with staying a little longer than our 7 day permit. We pushed off from the dock and headed onto Herceg Novi in search of the fuel dock. It is tucked away at the end of the ‘marina’ and small boat harbour, there is barely room between the bow lines from the stern tied boats and the small boats on moorings to enter and we touched the bottom while on the fuel dock. The diesel is only .82euro cents a litre so worth the effort. Exiting was even more tricky, 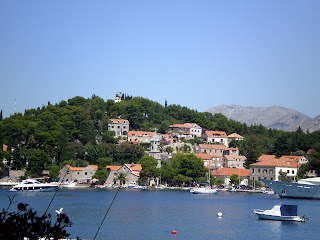 we had no room to get the bow around to motor out so our stern had to be pulled around by hand and then Skipper did an excellent job of backing us out, avoiding the odd lump of concrete jutting out underwater. Three docks in one morning was way too much entertainment for us and we were happy to escape to open water, put the sails up and head for Croatia.

It is a short hop up the coast, we had a good sail and around 20 miles later we entered the small port town of Cavtat. This is a popular customs port for yachts, as the alternative - slightly further north in Dubrovnik, is on a large commercial quay with those big black tyres we all try to avoid. The quarantine area is at the end of the town pier and you must tie to this in order to check in. Unfortunately a couple of super yachts were already tied up so we did a somewhat unconventional manoeuvre and stern tied perching on the corner of the dock, but it did the trick. About half an hour and 250Euro later we were all checked in to Croatia with our 1 year cruising permit. We had an uneventful departure from our 4th dock of the day and motored around the corner to the bay of Tiha just on the other side of the headland where it was free to anchor. Yes we had reached Croatia, the only country in the whole world (as far as we know) that in certain places, which are not advertised by any signage or leaflet, there is a charge to drop your anchor. In Cavtat harbour we understand the charge to be 50Euro per night, eek!!!

We stayed three nights as on our 2nd day we were joined by New Zealand friends (who will remain nameless!!) on their way south to Italy. It was great to catch up and we went out for dinner in the lovely little old town of Cavtat. By the end of the meal a gentle breeze started to blow, and we had seen on the forecast that we would have 20knots overnight so we finished dinner and headed back to their dinghy. Our dinghy had been left tied to their boat out at anchor. As we walked around the corner into Tiha the wind was much 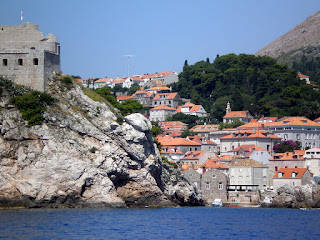 stronger but probably still only around 20knots so we headed straight out to their boat at speed with the waves crashing over the dinghies bow. The big problem was we could not find their boat, we could see Balvenie and she was where she should be but we could not find their boat, and of course it was dark by this stage. Heading downwind, across the bay towards the rocky shore we found her, attached to a charter boat (unmanned), our dinghy painter (rope for those not familiar with what a painter is!!) having wrapped itself around the charter boats anchor chain. Both boats had dragged and were perilously close to the rocks but the charter boats anchor seemed to be holding them, just. It seemed to take forever for us to untangle our dinghy which we had to leave attached to the charter boat as we could not get it around or under the anchor chain. Eventually our friends got their anchor chain up and after several attempts we managed to get their boat clear of the other anchor chain so they could reverse away to safety and re-anchor. Once 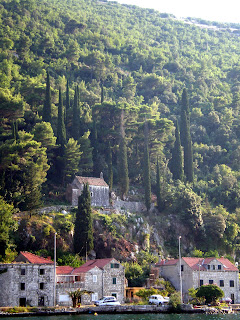 they were securely attached we speed back to collect our dinghy, just moments before the charterers returned, pulled up anchor and left into the night.

We returned to Balvenie and did anchor watch until around 5am when things eased right down and life returned to normal. This was not an experience we would like to repeat, but it seems most of the stronger winds up here come through at night, and even though we are always happy that we have dug our anchor in firmly, not everyone else does the same, and some of the holding is not great. Although in this case the charter boat possibly saved our friends boat from ending up on the rocks it seems many charter boats seem to drop their anchor till they think it touches the bottom, turn off the engine, put all their fenders out and go ashore.

From Cavtat we motored in very light winds the short hop up to Dubrovnik. We passed the old walled city, fishing harbour, customs and cruise ships docks and then we anchored the night up the river outside the ACI Marina. It was very busy with traffic into the marina and again the wind came up overnight, everyone seemed to be holding ok during the night but in the morning a large catamaran that had been fine all night started dragging down on the power boat next to us, luckily is was daylight by then and they were aboard and re-anchored. Anchoring in Croatia just might be a challenge. When the wind eased mid morning we went ashore and finally managed to fill our gas bottles, something we hadn't been able to do in Greece. When we got back to the boat there was an easterly blowing so we decided to save sightseeing in Dubrovnik for our return, lifted anchor and sailed west.