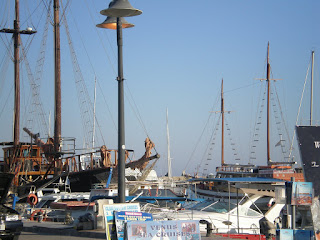 ***Balvenie squeezed into Paphos Harbour, we are the shortest mast right in the middle***Very much enjoying Diane and Clives home and pool set high in the hills overlooking the med ***Traditional Dinner out at their local taverna set down a real goat track***

After a delayed 11.30am start from Ismailia due to a warship transiting we finally reached Port Said at the top of the Suez Canal around 7.30pm. Our pilot had been far better than our previous one and the transferal of him onto the pilot boat went without incident and only one packet of cigarettes baksheesh to the pilot. We just kept on going after he had been collected. Finally we had escaped the clutches of the Red Sea, Suez Canal and the Egyptians!! We were in the Med, after 4 years and 38 days since leaving Auckland, we had made it. Of course this didn't mean that life got easy, we had a reasonably strong northwesterly blowing, sloppy lumpy seas, huge freighters in all directions, a couple of oil wells and it was nearly dark - everything comes at a price!!!

So in company with Tony and Clare off London yacht Hai Mei Gui we hoisted sails and headed for Cyprus as the sun sank in the West. We had a bumpy, noserly (wind on the nose!) trip but managed to sail about 30 hours until the wind died off in the early morning shortly before our arrival into Limassol on the southern coast of Greek Cyprus. Both Limassol Marina and the town harbour were full and turned us away but we were able to anchor in sheltered waters outside the Commercial Harbour for the night. We weighed anchor at first light and headed west 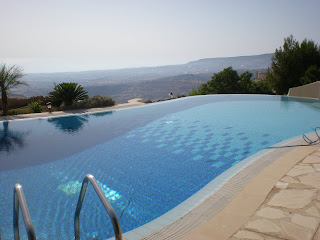 hoping to find room in Paphos harbour on the Southwest corner of Cyprus. We motored along the south coast enjoying the spectacular scenery of the steep cliffs dropping straight in the Med. Because of this there are few natural bays or harbours to anchor so cruising Southern Cyprus is limited to the couple of marinas and fishing harbours. Paphos was very full but we were lucky enough to squeeze in as one of the police boats was away being serviced. After some time we even managed to get Hai Mei Gui secure as well, check in procedures went well, we had finally, officially arrived in the Med.

Paphos is a cute little place, the fishing harbour area is dominated by a fort on the seaward end. The harbour is still used by local fishing boats but now also packed with day trip boats, offering all manner of options for the crowds of tourists (mainly British) that arrive each year. Although touristy the area has been restored and extended tastefully and has a very nice laid back feel to it. It was great to be in somewhere that felt "normal" to us after so many months in Arabic and African countries. While in Paphos we were lucky enough to catch up with relatives of Mark's 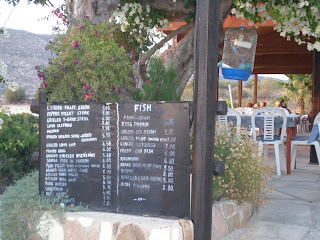 who retired to Paphos 5 years ago. Diane and Clive extended us excellent hospitality, took us to their local taverna for dinner, entertained us in their beautiful home set high in the hills overlooking the med, where we very much enjoyed cooling in the swimming pool and drove us to some spots we would otherwise have missed.

We shared a 3 day minimum car hire with Tony and Clare and took to the roads exploring all the nooks and crannies we could find along the coast then we headed to the hills.. It is so nice to smell the trees, hear the birds and enjoy all the varying colours of the landscape after months of being in desert environments. We visited small fishing villages then passed vineyards, olive groves, fruit tree orchards and as we headed higher drove through pine forests and bush right up to the snow level at Mt Olympus. We enjoyed a picnic lunch after a walk to the Caledonia Falls in the Troodos Region, a leisurely stroll around the beautifully preserved Kykkos Monastery and stopped at every opportunity to enjoy the views 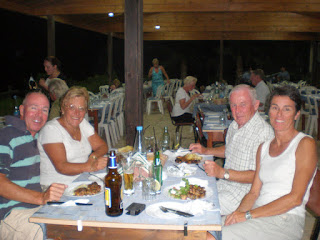 and local culture. We even fitted in a dip in the Med at Pissouri where the local hilltop village road was barely wide enough for us to fit our little Micra through.

We saw some great sights, everyone we met from check in officials to waiting staff could not have been more helpful or friendly, and I would certainly recommend this part of Cyprus, we love it and it was such a welcome breath of fresh air after Egypt. Sadly our space in the harbour was required again by the Marine Police so after provisioning and an easy checkout we headed for Turkey along with Hai Mei Gui, Tania and we rendezvoused also with Tactical Directions who were en route from Israel, hopefully this would be our last overnight passage for a very long time.