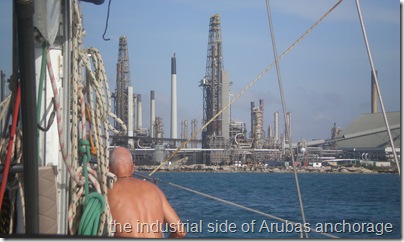 We had seen and done all there was to do in Curacao and  the best weather window so far this year was forecast for us to move further west, firstly to Aruba then onto Colombia.  Several cruising friends had done this journey within the last 6 weeks, and all had experienced very high winds and up to 5 metre seas, and it is reputed to be the 5th worst area of water in the world.  Yes - we really were looking forward to this one!!!

However Jimmy Cornell's cruising bible “World Cruising Routes”,  recommends the passage should be made in April, May or November – it was now April, the forecast looked steady with nothing over 20 knots and 2 metre seas.  Fingers crossed. 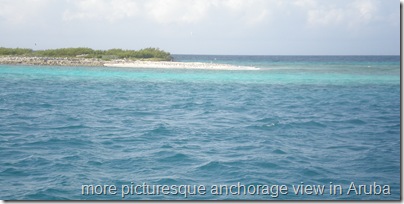 Still in company with our kiwi friends on Bandit we lifted anchors at first light. Skipper was happy to raise our mainsail after having it in semi retirement for many miles now, we poled out the headsail then pointed towards Aruba, around 70 miles away, it was going to be a long day.

A long day it was, but it was the most comfortable sail we have had since sailing from Morocco to the Canary Islands, that was way back in October.  We had steady winds and current with us and we rounded the southern end of Aruba with daylight to spare.  The entrance to our chosen anchorage at the bottom of the island was squeezed between an oil refinery and some tiny islands fringed with sandy beaches and turquoise waters, what a contrast! 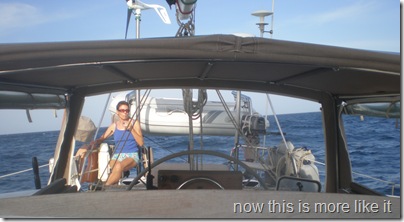 We came to Aruba on holiday nearly 20 years ago and weren’t too impressed with it then  - this time the adjacent oil refinery, a slight chop overnight in the anchorage, the requirement for having to berth at a yacht unfriendly dock for checking in and the continuance of a settled weather window all swayed our decision – it wasn't going to be a weeks visit again this time, it was just a one night stand!  The fastest rise and drop of a courtesy flag in Balvenie’s voyage so far, 14 hours. We were on our way to Colombia. 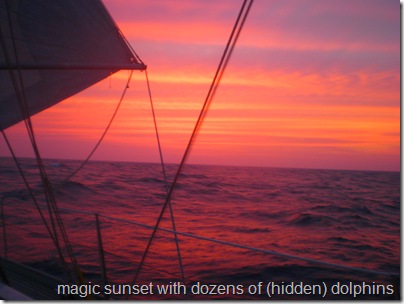 We went back to our normal downwind sail plan of headsail poled out to windward and staysail poled out to leeward, it worked well for the first two days with winds around 15 knots from directly behind us.  The sea was quite flat most of the time but we got long periods of adverse current which slowed us down, and even with the light winds chopped the seas up.  We could certainly see that it could turn into a nasty piece of water with strong winds fighting against the current and were grateful for the conditions we had.

Day turned to night, back to day, back to night.  The full moon was just magical, almost bright enough to read by.  Even with peaceful conditions we both struggle to sleep on these short passages, there was a reasonable amount of shipping to keep us alert, and we needed to make two course changes to avoid container ships.  You really have to wonder in these days of AIS if there is any watch kept at all by eye - they just steam on, heading straight for us, still it is much easier for us to see them than the other way round, so we always change course and keep a very good watch, especially in busy coastal waters. 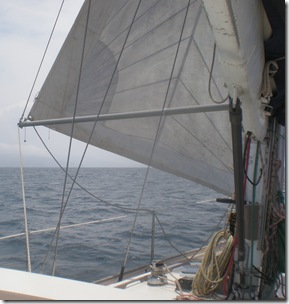 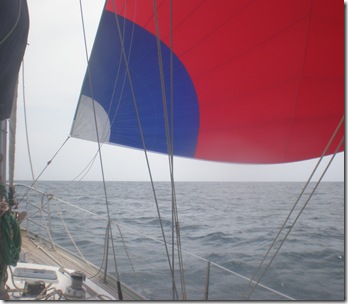 Needing all the sails up in light winds approaching Santa Marta

Day three dawned and the wind dropped to below 10 knots, time to play with Big Red again, he needed the cobwebs shaken out as it has been too windy to fly the MPS (Cruising Chute) for months.  The sea breeze arrived as we were making our final approach, it made for quite a challenging drop of Big Red, rather a handful to douse as the wind gusted around the headland to 22 knots.  So now we are tied up in the new marina here in Santa Marta, Colombia – who’d of thought we would ever sail to Colombia!!!! 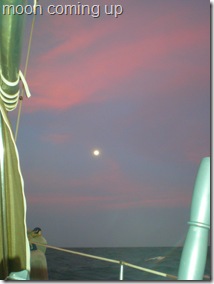 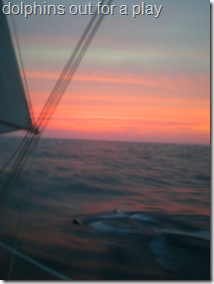